Planning on using water during your labor and birth? Hydrotherapy is a great option for comfort and pain management. The water offers warmth, buoyancy, and freedom of movement.

Despite research evidence that shows the safety of water birth for low-risk laboring women, an opinion statement by ACOG in 2014 has influenced many facilities throughout the USA to stop offering this option. (Read all about waterbirth safety and policies. And find answers to your waterbirth FAQ.)

Thankfully, in the Middle Tennessee Region, we currently have a few options for laboring in the water and/or giving birth in the water. This includes the Greater Nashville area as well as locations accessible to the Fort Campbell military community. More good news is that immersion in water has benefits as a pain relief method, even if you only use it for labor.

Want to chat about your options with a pro? Request a free consultation! 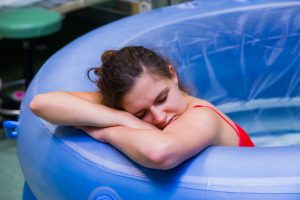 Whether in your own bathtub or shower or in a purchased/rented birthing tub, you are free to use water for comfort as you desire.
- Some homebirth Midwives own portable birth tubs that they either loan or rent to their clients.
- Some local moms own portable birth tubs that they offer for rent.
- Recent home birth moms may have suggestions on where to buy tubs/pools for birth as well.

Middle Tennessee is blessed with an abundance of homebirth Midwives licensed as CPMs. (A partial list of Certified Professional Midwives may be found at the TMA site.) Some take insurance, some don't. You'll have to check with each individually.

As of Spring 2018, Infinity is closed with no reopening date planned. Their Midwives are still offering natural childbirth support at Cookeville Regional Medical Center via the OBGYN and Associates office.

The Farm is known mostly as the home base of midwife Ina May Gaskin, author of Spiritual Midwifery and Ina May's Guide to Childbirth. The Farm is a small "community" with cabins available for rent during the weeks leading up to your birth as part of ongoing normal maternity care.

There are Midwives on staff and they have both showers and birth tubs available.  (Read one woman's Farm birth story.)

NorthCrest has both showers and garden tubs in every bathroom of their labor rooms. They are wider and deeper than your standard home bathtub but not anywhere near as large as the true water birth tubs found elsewhere. The benefit is that they are available in every room, so it's not a matter of luck of the draw. The disadvantage is that there's not quite as much freedom of movement as compared to a full-size birth pool.

UPDATE: Due to the purchase of the hospital by the HCA Network early in 2021, the Vanderbilt care providers' contract at NorthCrest has ended effective Sept 2022. The future availability of water labor is uncertain, as the policies and practices of any new care providers coming via HCA are yet to be determined.

Tip: Support from a Birth Doula is another form of effective pain relief during labor!

Baptist Madisonville has both showers and tubs in their labor rooms. When I first saw one, it appeared to be as small as a standard home bathtub. In fact, when I was able to sit in one myself (being a petite 5'2"), I could not imagine a full-term pregnant mom being able to fit inside. The one bonus is that the tub does have jets. Their virtual tour video mentions the tubs, but the nurse later explains that "you'll spend most of your time in the bed", which implies that you're not likely to spend much time in the tub or shower or even changing positions freely in the room.

NOTE: In facilities that require intermittent fetal heartrate and contraction monitoring but don't use a portable handheld Doppler to do it, you'll get 30-40 minutes max in the shower or tub, then have to get out to go into the room to be attached to the stationary monitoring equipment for 20-30 minutes.

Vanderbilt University Medical Center has large Aqua-eez brand labor tubs in 2 of its 13 labor rooms. It's a first-come-first-served situation, so if there's someone already in both of the tub rooms, you'll miss out on using one. Although by policy Vanderbilt does not allow water birth, these tubs are large and designed to accommodate birth. Each of the labor rooms does have a shower. (View the 2020 L&D renovation update.)

Monitoring using a waterproof handheld Doppler is available (known as intermittent auscultation). Wireless monitoring is also available using the Monica Novii devices, but while these devices are waterproof, the Bluetooth signal can be disrupted by the water which can hinder continuous monitoring.

Vanderbilt has Certified Nurse Midwives and OBs on staff. The Melrose Clinic group of Midwives tends to be the most natural-birth-supportive in practice.  (If you hear people talking about the "Vandy Midwives", they are referring to the West End Midwives. The West End Ave clinic has closed and has been merged with the Melrose location.)

Ascension St. Thomas Midtown has true labor tubs (same model as Vanderbilt) in a few of their 20+ labor rooms. (Midtown was formerly known as Baptist hospital in Nashville.) As of 2018, their new "birth center" rooms each have a tub. A few of the standard labor rooms also still have tubs. In order to use the in-hospital birth center, you must attend a special orientation class and have approval from your care provider. (View a tour of Midtown L&D and birth center rooms.)

It's a first-come-first-served situation, so if there's someone already in the tub rooms, you'll miss out on using one. But you have twice as many to choose from at STM as compared to Vanderbilt hospital. Although by policy STM does not allow water birth, these tubs are large and designed to accommodate birth. Each of the labor rooms does have a shower. Wireless monitoring is also available using the Monica Novii devices.

The "Midtown Midwives" — officially Connectus Midtown Midwifery & Women's Health — are a small group of CNMs who work out of the Vine Hill Clinic in Nashville and have delivery privileges at STM and Centennial. (They also are one of the few provider groups locally to support VBA2C.)

There are numerous Nashville OBs to choose from, of course. Dr. Amanda Barrett and Dr. Donna Crowe are popular choices among natural birthing mothers at St. Thomas Midtown. The Women OB group that they are part of currently has 3 Certified Nurse Midwives in their practice: Kayleigh Holthaus, Brooke Raudry, and Anna Napier.

The Baby+Co freestanding birth center opened in the summer of 2015 in Nashville. In May 2020, Vanderbilt purchased it, but the two had a working relationship from the start. (This is the only Accredited Birth Center currently in all of Tennessee.)

The 4 spacious suites have large open showers and deep soaking tubs in each AND the Vanderbilt Birth Center is the only facility in Nashville that supports water BIRTH as an option!

The birth tubs there are smaller than those found in the hospitals mentioned above, but they are adequate for both labor comfort and birthing in the water.  View the tour below to see the facility and the birthing suites. One of my favorite things about the Vanderbilt Birth Center is that it is a truly freestanding facility with a direct entrance that will have you in your room in seconds, yet is only 1.5 miles from the hospital.

Centennial Hospital underwent renovations recently and has added tubs to a couple of its rooms. Despite the mention on their website of "birthing tubs" being available, water birth is not allowed, there are strict requirements on who is allowed to use the rooms, and access is also dependent upon adequate nurse staffing. All of the labor rooms have showers available.

Midwifery care is an option via the OB Emergency Dept team for patients who arrive without a designated care provider (such as with homebirth transfers). The WomenOB group CNMs also have privileges to attend births there.

Choosing the right Care Provider is essential. Let's chat about it!

LOCATIONS THAT OFFER ONLY SHOWERS:

*Although they have tubs in their LDRP rooms, they do not currently allow them to be used during labor.

Do you know of options for water labor and water birth that are not listed here? I'd love to learn about them. Please share via my contact form!